Let’s forget about the bad times.

Nine months ago I watched you eagerly stuff everything you could find in the entire house into your backpack. (Of course I took it all out once you went to sleep, minus the glue stick and crayons). As you packed you told me you thought that in Kindergarten they would teach you how to drive and how to cook. I secretly hoped they actually would, since I’m 30 years old and haven’t mastered either of those things yet. You talked of adventures, new friends, teachers and field trips. Your anticipation was infectious, and soon I myself wanted to return to Kindergarten.

During the first few weeks I watched as you learned to navigate this new system. Rules, consequences, green light, red light, raising hands, taking turns, inside voices, it was as if they were never going to get to the driving part. You seemed to find plenty of other skills to master, however. Like kissing boys on the playground. TWICE. In the first week of school. And getting a bead stuck up your nose on the second day of school which resulted in me having to yank you out of daycare, take you to the doctor’s office, and spend $250 for them to use fancy pliers to dig the bead booger out. You also learned about civil disobedience when you tried to get the rest of your class to not say the pledge of allegiance, and you certainly learned about covering your tracks by throwing away bad notes.

As the weeks turned to months I watched your excitement fade. I heard your answers turn flat when I asked you about school. I saw your face twist in disgust when Monday came around. I saw your very self deflate with each day that passed, each bad note ripped open, and every phone call received. I saw your intentions overshadowed by frustration, curiosity overcome by routine, and your interest overturned by boredom. Without a single cooking lesson to show for it.

The truth is Evan, the way most classes are structured is not well suited for you. Nobody can dispute that you are anything less than brilliant for your age. You score off the charts in the silly tests that actually mean nothing in real life. You read with fluency. You do math. You talk about patterns to the point that all the adults in your life never want think about patterns again. But the other parts of Kindergarten were not so easy for you. You are fast paced, adventurous, and you need to be excited. You want to learn how to drive and instead you got coloring sheets. I do understand the frustration.

However, you made it. Tomorrow is your last day of Kindergarten baby girl. I couldn’t be prouder. I certainly wasn’t the mother that a blossoming kindergartner deserves. Bogged down by tests, papers, articles, and tied to a computer. I never made it to an after school function, I ordered your book sale books online, and I couldn’t even remember to cut off the stupid tops of cereal boxes to win points for your classroom! (I did send you popcorn money EVERY SINGLE Friday except once when I was really broke, though. I want that to go on the record). The one thing that I hope you will think about when you realize all the failures I had as your parent, that the one thing I do really, really well is surround you with the best people this life has to offer. People who love you right along with me, people who support you even when things are hard, people who (at least in my mind) cut out enough cereal box tops to compensate for me.

I am proud of you for so many things, but none of them more than this one. Last week as we drove home from school and I asked you the stiff, routine question that I still haven’t thought up an alternative to, “how was your day today?” you told me “Mom, I’m really sad for my friend at school right now”. I asked you why, expecting to hear that your friend has a mom who is every bit as mean as I am and won’t let her wear short shorts, heeled sandals, or lip gloss to Kindergarten. Instead you surprised me and said “her uncle got in a fight last night. It was a bad fight. Nobody stopped it, and now he’s dead”. I sat stunned thinking of how scary that must be for your poor classmate. I knew that the story must be true, and not “Kindergartener-ized” like many of your stories are. (Last week we got in a huge fight because you swore to me Justin Bieber pushed one of your friends). You continued and said “and I just feel really, really bad for her”. You were genuinely upset for your friend so we talked about things for a while. In that moment, wrapped up in the sadness I felt for your friend, I also fell a little bit more in love with you. Your sweet compassion and optimism. If all that you got out of Kindergarten was that one moment, where you felt sad to the core for another human being, then I could not be more proud of what you got out of this year.

You also decided all on your own that night that you wanted to write a note to your teacher letting her know you were going to be behaving for the next few days (no definite time frame was made). However, I couldn’t disuade you from ending the note with “everybody makes mistakes sometimes”. I’m not entirely sure whether you were referring to yourself or her.

The other day you were inside playing the dancing game on the wii and I was outside in the garden. It had been a really rough week, and your behavior both at school and home was even Evan’ier than usual. I could hear you dancing to Madonna and I was stifling giggles and refraining from telling you that I had probably danced to this same song numerous times in my youth. Suddenly you bolted out the door and said “MOM! This song just said something so cool. I can’t wait to tell you what it said!” I cringed thinking of the possibilities. Any mom credentials I’ve gained should be stripped from me solely on the grounds of letting you listen to some of the songs on that game. “It said let’s forget about the bad times and celebrate! I think that’s exactly what we should do!”. Oh Evan. Of course that’s what you think we should do. And as you all too often are, I think you’re right. I think we should forget about the bad times and celebrate this miraculous accomplishment. We both survived your Kindergarten year. 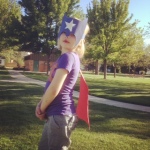