Failing Together: The “Mommy Wars”

I used to not believe in the so called “mommy wars.” I assumed they were inflated. I thought they were titled in a divisive way to pit women against each other. I considered “mommy wars” to be exaggerated, misunderstood, and sometimes altogether made up.

Then I wrote a blog about using technology with my children.

Except it isn’t just “mommies” at war. It is people who have never had children (but are certain they know how to raise them). It is parents who have children that are grown, but they did everything perfect so now they are offering the rest of us sorry suckers some advice. It is people who plan to someday have children, have read every book about it, and are now experts on the subject matter.

Parenting topics have always been debated but I cannot imagine that parents have ever been under this much scrutiny. Mostly in part to the fact we’ve never had this much access to information and information sharing.

I had to think really hard for awhile about whether I wanted to continue on this blogging adventure. It is all fun and games until 5,000 people tell you what they think about the way your kid draws cats.

I know that people on all side of this technology debate (and replace this with any current “mommy war” topic) are passionate about it because they love children. That is why I came back to this blog.

As a follow up to a particularly harsh comment that called me both lazy and not suited to adequately parent, a local mother replied with this.

“You and me Meg, we’re all failing in this together.”

Failing is something I’ve learned a lot about recently. One year ago when my library started creating a Makerspace I knew nothing about the tools and technology that would go into it. The greatest lesson, for me, through the entire process was learning by failing.

It took me 20 tries to get this breadboard to light up. 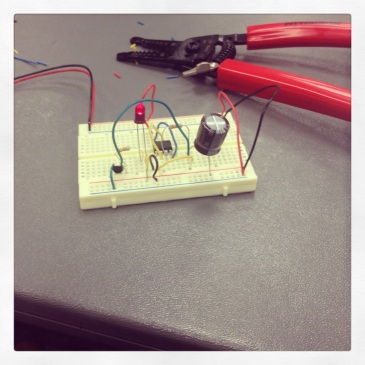 The first time I used our 3D printer I “cooked” wood filament inside it and broke the thing.

First time I used our 3Doodler?

What is it, you may ask? A failure.

Through all the failure, I’ve learned a lot.

I came back to this blog because I am also passionate about children. So much so, that I think it is amazing that we are such failures according to the “mommy wars.” How else would we be learning anything?

Failing together might be the only thing we (everyone working with children) all have in common. There is much that can divide us, but I am certain we are all doing our share of failing. I am proud to be failing with all of you.

Here is my latest failure. I, the children’s librarian, just forged my children’s reading logs so they could take them to school and redeem a prize. Did they read the 600 minutes? Of course they did! Did they read the books I wrote down on the dates and times I noted? Indeed they did not. Let’s hope my clever pen changing at the halfway mark threw them off. It makes my daughter using youtube to learn how to draw a cat not sound so bad, right?

Will I learn from the failure? Maybe. I really hate those reading logs.

I think the real lesson comes from admitting that we don’t know it all. That is what failing does. It allows us to ask questions. To share successes. To work together to make progress on this unsolvable puzzle.

So I not asking what you think about the princess debate, your thoughts on makeup free selfies, and I’m certainly not touching the vaccination debate.

What I really want to know is how are you failing?