If I could turn back time. 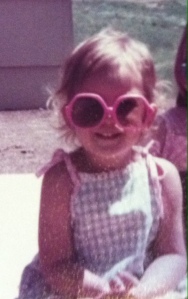 My future was bright.

The first career aspiration I can remember was that I wanted to be a rockstar. I was young and full of magic and hopefulness. Unfortunately I wasn’t full of talent or reality. My future came smashing to an end at the age of 8 when I heard a recording of myself singing for the first time.

“That’s not me,” I claimed, although there was no denying that the person on the tape I had just recorded did have the exact same name as me (stated at the beginning of the “album”) and sang the exact songs that I did. There is a bleak job outlook for tone deaf rockstars.

Then I wanted to be a lawyer. I loved arguing and I wanted to make hundreds of dollars (equivalent to millions in kid language) doing so. I carried this with me for a long time, and considered it right up till my graduate school years when I had established an adult sense of money and had a full understanding of what a J.D. will cost you.

In-between those two I wanted to be an Actress, a Teacher, a Nutritionist, work in the Non-Profit Sector, a Physical Therapist and a Politician. Most people change their major a time or two. I probably changed mine 7 or 8.

But I grew up. I fell into being a librarian.  And I’m so glad I did. Being a librarian has allowed me to to be thirsty for knowledge and eager to help people. Batgirl in the flesh.

But with librarianship, like many other careers, the higher up you climb, the less you get to do the work you fell in love with. In its place is new challenges, new lessons, and new skills that can be equally as rewarding and significant. But different. Less cape and more paperwork.

Even though I grew up and found a career, I’ve never actually stopped changing my mind about what I want to be when I grow up. I love what I do and I believe that I’m good at it and I also change my mind frequently about whether I want to do it for my entire life.

Two months ago I wanted to be a writer. Last week I wanted to pursue a Ph.D in Public Policy and Administration so I would have a better shot at City Council some day. This week… I’m not even going to say it. I’ll just say that it would require me taking Human Anatomy and Physiology  and I would be facing 5 years of re-education.

Was I supposed to grow out of this? Did I forget to shed a layer of idealism when I entered the real world?

Or is there something else that I’m supposed to be doing?

I still feel like that 8 year old wanting to be a rockstar. Only I’m stuck between the dreamer and reality. The dreamer knows that she has things she would love to do. The reality is she is already happy, in a career, and far into student loan debt for 7 years of college.

How do we really know what we’re supposed to do? Aside from a recording of yourself that serves as a slap-in-the-face guarantee of what you are not supposed to do. And when is it too late find out?

tagged with career, job change, librarian, what do I want to be when I grow up