The Tooth Fairy is a Dirty, Rotten, Scoundrel.

The Tooth Fairy visited our house last night. I will try to contain my excitement since I was up until 11:30 waiting to play Tooth Fairy then up again at 2:30 when my overly excited 5 year old needed to share with me RIGHT THEN what the Tooth Fairy had left her.

I never wanted to pretend there was such a thing as anthropomorphic rabbits who hide eggs, old men who hang stockings, or fairies that collect teeth. I was so angry for years (OK, maybe decades) after I found out my parents were behind these things that I swore I would never lie to my own children.

And then I had children.

Like every other good intention I had before parenthood, this one went out the window. They were so excited when they heard about these visitors from kids at school that I couldn’t not play along. I told myself it was their introduction to LARPs, I was just the only one playing.

So I’ve done my part, they’ve followed, and we’ve had a pretty good time with it. With the exception of the Tooth Fairy.

I’ve never liked the Tooth Fairy. Not only does she come MULTIPLE times a year (because I have two young children with what seems like endless teeth they are yanking out) which means endless chances for me to mess up the gig, but she also collects dead body parts. Think about it. What if a fairy flew in every time I cut off my kids talons of finger nails? What if there was a fairy that swooped down and peeled off layers of dead skin after a sunburn? It’s disgusting.

My oldest was leery of TF from the start. She didn’t like the fact that she came into her room, and I can’t really blame her for that. She made amends when she got her first paycheck from that fairy, but she never forgot their rocky start. It all culminated one night when the Tooth Fairy had the audacity to leave a note telling her congrats on losing a tooth and hey, by the way, maybe you should be a little nicer to your sister. In a 6 year old fury my daughter slammed her note shut, screamed “That Tooth Fairy isn’t the boss of me! She is only the boss of teeth!” and stormed out of the room. TF only mentions dental hygiene practices in her letters now.

But my youngest has been far from leery, and instead is filled with curiosity. Even before she lost any teeth she wanted to know where the Tooth Fairy kept all the teeth, how she knows when someone lost one, and why it didn’t work when she put a rock that looked like a tooth under her pillow one night.

I never know how to answer these questions about a pretend character that I don’t even like. I don’t want to negate science by saying she keeps the teeth on a cloud just like I don’t want to pretend the fairy isn’t walking a fine line of criminal activity for coming into children’s rooms at night when they are sleeping. I thought I had fielded all the questions my youngster could think of about this particular subject until she stumped me this morning.

“Where does the Tooth Fairy get the money from?” she asked sweetly.

I was exhausted from her 2:30 wake up call (thanks again TF) and all I was thinking about was how I hastily had grabbed a dollar off the counter last night, not entirely sure who it belonged to.

“She… finds it”, I replied, not entirely convincingly.

“Where does she find it?”, she shot right back.

She stared at me long and hard. I realized my mistake almost immediately. Did I just tell her the Tooth Fairy steals money from houses to pay for body parts?

I did. And I’m OK with that. I think it is fitting that a creepy fairy would fund her operations with stolen loot.

Just another reason that the Tooth Fairy is a dirty, rotten, scoundrel. 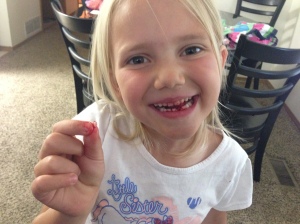