Keep your Pretty Princesses off of my Mighty Eagle.

I am that parent. The one that shows up early the first day of soccer practice for the parent meeting. I’m not the one who has already made a rough draft of the snack schedule. I am not the one who has volunteered for uniform duty. I am not even the saint parent that got suckered into coaching. I am the one who will go to extreme measures to make sure that my girls do not play on the team named “The Pretty, Pretty Princesses.” (<– real team name).

It was a lesson I learned early on parenting young girls who play sports. I was lucky with my first one that she has had the same name every year for her team. Rocket Girls. But with my second it has felt like every single year was a battle. Without a pause when it is time for a team name, either a young girl or a parent has thrown out choices like “The glowing glitter fairies” or “The fashionista unicorns”. CRAP! Gendered, sexist, nothing to do with soccer/sports/anything competitive or active, CRAP.

But I missed the parent meeting this year. Not because I was confident that they could choose an appropriate name without me shooting daggers in their direction, but because I’ve taken the month before my wedding to deal with physical therapy, job applications, head lice, several trips, and trying to write a book. Plus, I probably just forgot about the meeting.

So imagine my horror today when the parent next to me started cheering for the DIVAS.

It was her team.

Do these parents not realize that I deal with DIVA every day? Diva isn’t something cute, or funny. It certainly isn’t something I would encourage any child to be, not to mention that it has NOTHING to do with soccer.

I was so angry. I went to the league website to look at what the other teams were named this year. There are about 40 girls teams (10 and under). Of those teams, 6 of them have the word pink in their name. This might not seem like that many to you, except their uniforms are RED or WHITE. There is no pink. Four of them have the word princess in their name. Others include the Rainbows, Unicorns, Magic Mermaids, and let’s not forget Divas. Is this a pageant or an athletic event?

Last year during basketball season my girls had practice on the same night so I also couldn’t be at the naming ceremony for my youngest. But when she got home and enthusiastically screamed “We’re the Mighty Soaring Eagles who Breathe Fire” (<– actual name) I knew I had nothing to worry about with this team.

THAT is how you name a team. Nobody wants to play the Mighty Soaring Eagles who Breathe Fire. They will get burned AND carried by sharp talons to a nest to be eaten.

And I understand that not everyone shares my views. I respect that. I feel strongly that we all just have to do what we think is best for our own children. But can we pretty, pretty please, with a pink princess on top, stop with the ridiculous naming of girls sports teams? Could sports be a starting point where we work together to empower young girls to be fierce? To be more than princesses? Could we let girls soar instead of weighing them down with worry about how they look or act? Could you please keep your pretty princesses off of my mighty eagles? 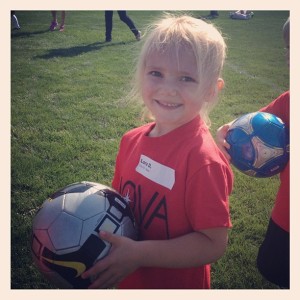