I spent my weekend building a leprechaun crap. I can’t really call it a trap because nothing on it was functional except the unintentional RIVER OF TEARS that could drown even a giant leprechaun.

This is how the process went.

The 6 year old demands help with the trap, saying she has no idea how to do it.

The 6 year old screams at the adult to stop bossing her around.

The 6 year old cries that nobody is helping her with her leprechaun trap.

The completed project we turned in on Monday (and yes, I mean WE because not only did I have to endure the small tyrant of a director, but I also had to help her carry the thing inside) was so horrible that I didn’t even want to put her name on it. And yes, I do mean that I was the one putting her name on it because if you haven’t figured out by now I was the one doing 90% of the work while she was the one doing 90% of the yelling. To be fair, I actually did a lot of yelling too. The end result was a semi-smashed carboard box with the lower level covered in blue pastel (mistaken for a crayon) that smudged every time you touched it. The “trap” element was twofold. First, there was a bridge that refused to stay taped to the pastel surface, so it really was a phantom bridge most of the time. Supposedly the bridge was sticky and the leprechaun could get trapped there. I believe the leprechaun is in greater danger of sliding off the bridge each time it detaches from the box. Next, there was a piece of gold (which was a CHUNK OF A PURSE she took scissors to) on top of a straw. Next to it sat half of a plastic easter egg attached to a toilet paper tube. Somehow, if the leprechaun climbed up to reach the piece of gold formerly known as a functional purse, the easter egg toilet paper trap would fall on it. Simple, right?

Until the 6 year old bursts into tears because she thinks she will be marked down if she doesn’t actually catch a leprechaun.

So today I took solace when I heard another mother complaining about the dreaded leprechaun trap assignment. She confessed that tears were shed at her house as well. (She also mentioned a hot glue gun, however, so I’m not quite sure we were experiencing the same level of failure.) Her daughter wanted to know, in all seriousness, if she should leave the trapped leprechaun at school or bring it home.  Then the mom says to me: “I heard that by 3rd grade they have to add a mechanical element to it.”

Are you kidding me?! We can’t even figure out what is a crayon at my house.

Around 4:00 this afternoon an exhausted looking 9 year old saunters into the library and tells me “I need all the books you have on building leprechaun traps.”

“Trust me,” I tell her with full confidence, “we don’t have those books.” “If we did, I would have them all checked out right now.”

I try to offer her some suggestions, after all I am now extremely experienced in the trap department.

“Have you thought about using a slip knot? Something really sticky? A mechanical element?”

She tells me she has thought of all of it, and what she really wants me to do is Google “What kind of leprechaun traps are the most successful at catching leprechauns.”

I hand her a package of blue wall tacky and tell her to try that instead.

After all this trap drama, these are the only kind of leprechauns I still like. 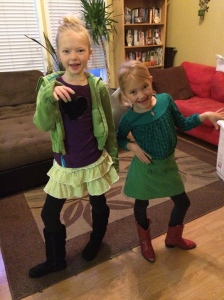