Yesterday we did an amazing 3 ½ hour trek into the rainforest. Now, before you start thinking that every day I get to have some fabulous experience here in Africa, let me assure you that I spent the last two days bed ridden by some awful stomach bug. I literally slept for 24 hours straight, and at times I was so tired I couldn’t even lift my arms. However, I’m much better now and was even more grateful to be able to go on such an adventure after not moving around for several days.
The weather was perfect for novices such as ourselves to attempt something as strenuous as exploring the rainforest. It was cool (Kenya standards, maybe 80) and raining slightly. There are transects cut in forest for the researchers I live with to walk along, but even those are so dense we were often crawling to make it through. The rainforest is so serene. I’ve never wanted to stay in a place more than I did there. We were able to see Columbus Monkeys, Sykes Monkeys, Baboons, red squirrels, and lots of birds and insects.
After several hours of walking we started spotting a few sea shells. Someone made the comment that it was strange for people to bring sea shells into the forest. Suddenly we looked up (you are always looking down at where you’re going) and realized we were at the sea. The forest had taken us to a cliff where it ended, and several feet below us the ocean was washing right up to our vertical mark. It was quite the feeling standing with the rainforest behind us and the ocean in front of us.
After the forest I started wishing I had signed up to volunteer in there instead of in the community. After we finished our creative writing class later that day, however, I remembered that it’s really the people here I came to see. I am very thankful though that I’ve gotten to experience so many parts of Kenya. Today we are going snorkeling in the ocean, and we’re hoping to see some dolphins! Fingers crossed. 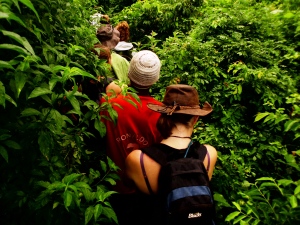